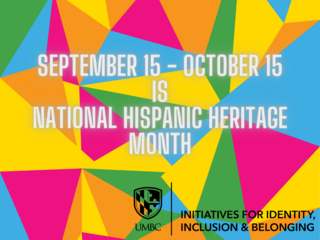 This post was written by Carlos Turcios ‘15, ‘17 M.A. Coordinator with Initiatives for Identity, Inclusion and Belonging (I3B). *Please note that some references are accessed through the AOK Library Databases and will ask you to be logged into your UMBC account.*

National Hispanic Heritage Month (HHM) has been recognized by the federal government and celebrated across the United States since 1968.  Representing approximately 18.5% of the U.S. population, there are an estimated 61 million people who have ancestries connected to Latin American countries who reside in the United States (U.S. Census Bureau, 2020), including myself and a few folks on our I3B professional and student staff. This represents a significant increase from the 2000 Census, which registered the Hispanic population at 35.3 million or 13% of the total U.S. population. Many labels are used for our community with the most common umbrella terms being “Hispanic” and “Latina/e/o/x.” Hispanic/Latine/x Americans have been influential in every part of U.S. history, from day laborers, politics to the arts to businesses and innovation to the military. The U.S. Hispanic/Latine/x community have had a profound and positive influence on our country through their strong commitment to family, hard work, and service. They have enhanced and shaped our national character with centuries-old traditions that reflect the multiethnic and multicultural customs of their community.

So why does HHM start in the middle of September and end in Mid-October?

HHM is celebrated annually from September 15th through October 15th to honor the history, culture, and contributions of Americans whose ancestry can be traced to over 20 countries and 14 dependent territories in Latin America, including Mexico, the Caribbean, and Central and South America. The start of this cultural month, September 15th, is significant, as the majority of Latin American countries celebrate their independence from Spain throughout the second half of September through early October (i.e. Costa Rica, El Salvador, Guatemala, Honduras, and Nicaragua).Mexico, Chile, and Belize also celebrate their independence days during this period and Columbus Day (Día de la Raza) is October 12 (Rachum, 2004*).

So should I use Hispanic? Latina/o? Spanish? What’s the difference and why does it matter?

The term Hispanic, refers to the racially and ethnically group of folkswho are from Hispanophone (i.e. Spanish speaking) countries that were historically colonized by Spain. This term is inclusive to those who are also from Spanish origin. The term Latina/o however excludes Spain, but includes non-Spanish speaking Latin American countries such as Belize, Brazil, Guyana, and Haiti. Please note that even if folks may have ethnic roots from Latin America, they may identify as both, either, or neither Hispanic and/or Latina/o. We encourage you to check out how the term Hispanic has been reclaimed and its impacts on the Brown Power Movement, as well as our upcoming [Free]dom Friday (details below). What our community chooses to identify as is connected to the complex history of how the terms Hispanic and Latina/o came to be. Those who reject both Hispanic or Latina/o may identify with their national origin instead (i.e. Chicana/o/x, Salvadoran, Chilean, Domincan). Others may identify more closely to their racial identity (i.e. Indigenous, Afro-Latinx).

Spanish on the other hand, only applies to those who are Spaniard or have a direct lineage to Spain. If those do not apply, PLEASE do not use the word “Spanish” to identify Hispanic/Latina/e/o/x folks. Also note that although Hispanic and Latine/x have been racialized in the U.S., they are ethnic, NOT racial identities.

Latinx? Where does this term fit in? The debate on gender and gender inclusivity.

Originating in the mid-2000’s, the term Latinx (pronounced La-tee-nex) came out of the limitations of the term Latino. As a binary gendered language, Spanish only has a masculine and feminine version for all nouns. Every noun whether it being an inanimate object, an animal, or person all have a “gender” regardless of the individual’s sex. However, this comes into conflict for those who do not identify within the gender binary.

Additional critiques of the word “Latino” exist, including the patriarchal nature of the language. Specifically, the default plural in Spanish is masculine, regardless of the gender distribution of the group. For example, if you referred to our entire I3B professional and student team of seven folks, the plural would still default to masculine even though I am the only member who identifies as a man. Latinx serves as a way to deprioritize masculinity.

So, what about Latine?

As gender-inclusivity becomes increasingly global, variations of gender inclusive identifiers (i.e. Latine pronounced La-tee-neh) have popped up in Spanish speaking countries. Unlike “x,” “e” can be used to fit the grammatical structure of Spanish much more easily that facilitates its use for Hispanophones. There is no right or wrong between Latinx and Latine, just know that regional variants exist and are a product of their creators and who identify within the community.

Which term should I use?

From an inclusive standpoint, the terms “Hispanic” and “Latin(e/x)” would be best for general communication when referring to a large group. They are both umbrella terms that are gender inclusive. However, this could look different when you are addressing individuals. Understand that Pan-ethnic labels are clunky and some people do not “fit in” perfectly (Pew Research Center, 2020). What a person chooses to label themselves can be affected by their race, ethnicity, birth place, dominant language or generational group. These factors make it messy but I encourage you to learn about our vastly diverse community. Finally, we invite you to share this with your friends, colleagues, professors, and networks across campus. When in doubt, just ask!

The Brown Power Movement and the Continued Struggle for Immigrant Rights

A check-in conversation on your needs!

A Presentation on Race and COVID-19

A discussion on our culture and most meaningful relationships

We encourage community members to follow these groups on myUMBC or Social Media!